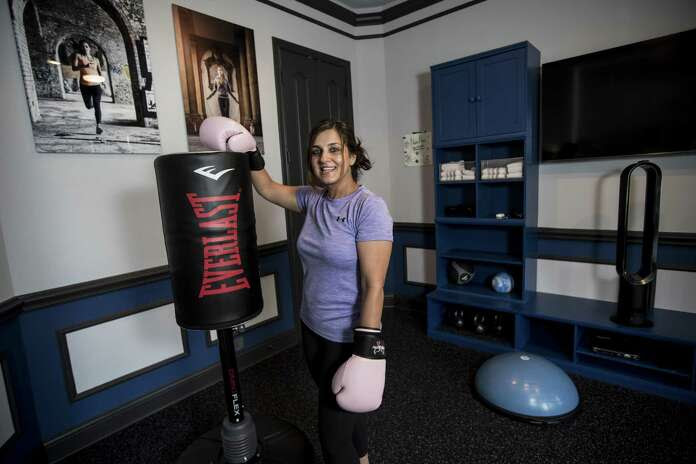 When she tires of punching, the 40-year-old mother of four uses it for kickboxing. There’s a nearby Dyson oscillating fan keeping her cool, and shelving holds towels, weights, kettlebells, and other exercise equipment in her Humble home.

The home gym was a gift from her husband, Shashi, for her 40th birthday. Before its transformation in February, the Malkanis used the room as a toy/hangout space for their kids, ages 11, 9, 6 and 3.

But never in the 10 years they’ve lived in the home have they ever used the room for its original intent: a formal dining room.

As the American lifestyle gets ever more casual, formal spaces — such as dining rooms — often either hold lovely furniture that never gets used or they’re converted into something more functional, whether those who live in them are young families, baby boomers or something in between.

Part of the trend comes from homeowners wanting more-open floor plans. With fewer walls, dining areas blend in with kitchens and family rooms. There’s also the issue of Americans’ busy lives — with parents working longer hours, kids involved in more after-school activities and the family dinner tradition getting sidelined. Those who do dine together often opt for the more casual setting of a table off the kitchen or even outdoors on a patio.

But in many homes, that room set aside — often near the front of the home but always accessible from the kitchen — for formal family gatherings is finding new life as a home gym, meditation space, office, kids’ study, playroom or even family arcade.

Houston interior designer Saima Seyar of Elima Designs worked with Shashi Malkani to transform the room as a surprise gift. The two went to elaborate lengths to keep it a surprise, with Shashi telling his wife that Seyar was helping him with a fish tank. Neda — vice president of Tax at Kinder Morgan — went on a girls’ trip to Napa Valley, and while she was gone they had the room painted and rubbery gym flooring installed. Shashi bought the punching bag and other exercise equipment from a list of suggestions from Seyar, who also had inspirational fitness photos prepared for artwork.

“We like more casual dinners. A dining room becomes more formal like you can’t hang out there. When friends come over, we might sit at that table for three hours,” Neda Malkani said, pointing to the long family table near the kitchen. “I don’t see us doing that in a formal dining room. I didn’t grow up with one either, so it wasn’t hard for us to say it will be a toy room or something else as the kids get older.”

Seyar often has clients who say they want to build bigger homes, but when she asks them about how they use their existing homes she learns that whole rooms go unused. With standard dining rooms starting at 10 feet by 12 feet, it’s plenty of square footage for any number of other uses.

“I have to point out to them they can use their dining room for anything they want, and they look at me with complete surprise every time. Every single time,” said Seyar, who is president of the Texas Gulf Coast chapter of the American Society of Interior Designers. “We talk about how they live, and so many times that dining room — or the formal living room, for that matter — aren’t used at all. Typically, we end up turning it into a meditation room, workout room, kids’ playroom. I’m always telling them, ‘Use your rooms for what you want.’”

At MP STUDIO, Shana Jacobs and her colleagues design model homes for national homebuilders. They mock up plenty of dining rooms, but they always show options for how those spaces can be used in other ways. She said many builders are constructing homes with large breakfast nooks or space in an open kitchen-family room that would hold a sizable table.

“Homebuilders have a hard time because they can’t omit them completely — too many people feel the house wouldn’t have resale value without them,” said Jacobs, who is the firm’s executive creative director, interiors. “When we get a floor plan from a builder, the first thing we look at is how we’re going to program the rooms, how they will function. We put ourselves in the place of homebuyer … if they are going to have a large family, we might consider a dining-room option. However, if there’s a large secondary dining space that can function with a large table, then we immediately want to use the dining-room space for something else.”

She’s created models with that room as a home office, a den, even a space designed for kids to do homework.

In her own first home, Jacobs used her dining room as a play space for her young daughter. “Until my daughter was 3, I gated our dining room because it was connected to the kitchen. It was perfect; it was a lifesaver for us,” she said.

When it came time to sell that house, the kid stuff came out, a table and chairs went in, and no one had a clue that the room had ever been used as anything else.

Even when she mocks up a dining room as a dining room, she might create a wine wall or bar space in the back where five or 10 years ago someone might have placed a china cabinet. Since no one wants those — or the fancy china — either, even an updated dining room doesn’t look like it used to.

Jacobs said that dining rooms are easily converted into home offices with little to no remodeling. If it has built-in cabinets, use them for office supplies. If a light fixture hangs in the center of the room, lift it up closer to the ceiling so no one bumps his or her head on it and place it over the desk, she said.

“A tray ceiling works as well in a dining room as it does in a study. Add some wallpaper or paint. Light fixtures are easy to change,” Jacobs said.

In new homes or remodeling projects, Jacobs said homeowners can use the same flooring in a dining-room space as nearby rooms — a foyer, kitchen or other rooms — and it will seem more like a continuation of space and less separate.

Seyar said some of her clients have wanted to create ground-floor bedrooms for caregivers and add doors and closets to dining rooms to create small bedrooms.

As a builder, Mike Dishberger — owner of Sandcastle Homes and a past president of the Greater Houston Builders Association — has seen plenty of trends in the 35 years he’s been in business.

He said that homes in the suburbs still emphasize dining rooms, but many homes going up inside the Loop have open floor plans and one designated dining space — rather than a formal dining room — breakfast area and counter seating at an island. Though some Realtors and builders believe a dining room still helps a home’s resale value, Dishberger said that among his clientele, that stand-alone space is a negative.

“Everyone wants to have entertainment spaces, to be in the kitchen and see all the way into the family room. It used to be the dining room was off in its own special room — even breakfast rooms are out now. We don’t call it a dining room; it’s an eating area,” Dishberger said.

“We build 60 homes a year, and if the market says, ‘We don’t want something,’ we put in something they do want,” he said. “I only build two-story townhomes, and every inch counts. You really want to utilize space for what people want. We’re starting to take away tubs for our master baths because people want bigger showers.”

This article appeared on the Houston Chronicle